On her 2nd birthday

Well it's been a while and I wonder if everyone has given up, but here is some new stuff anyway :)

A lot has been going on. Ella is talking up a storm and we lose ourselves sometimes in the time that flies by. It's hard to believe that she's going to be 2 in August!!
Dan and I survived our 30th birthdays. We actually got to get out while Grandma and Grandpa babysat. We had a wonderful, long dinner at Rick's Prime Rib and then followed the evening with a little bowling. We used to love to go bowling. And we had a great time just laughing at ourselves.
Then at the end of May we went to Massachusetts to visit friends and Ella got to go to the beach for the first time, as seen here: 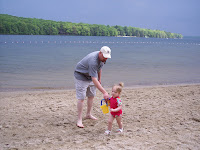 June was a busy month. Every weekend we had something planned and the month went by very quickly. This month Ella learned how to moonwalk. We still haven't caught it on video, but it's pretty darn cute. I know everyone is probably sick of hearing about Michael Jackson but I know that I was very sad. I grew up listening to his music and loving him like the rest of the world. I will make sure that Ella knows his music. She already claps her hands when she hears him :)
July started out with the lack of a bang. Ella ended up with strep throat just before the holiday weekend. I spent all day with her Thursday because she woke up with a high fever. I took her to the doctor's in the afternoon and not long after she was on antibiotics. Here's her looking sick: 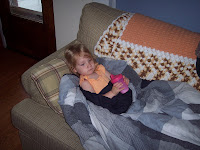 But by Friday afternoon her fever was gone and she was getting antsy. So she got to go visit Lollypop Farm to see the animals. On the 4th we went to my Dad's for a BBQ. Here she is in her new dress mommy bought her: 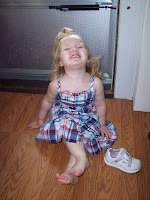 She also had her first swim in Grandma and Grandpa's pool on Sunday. Those pictures are yet to come because the battery in my camera went dead. I have to get those pictures from others who were there with batteries that weren't dead :)
Well that's all for now. Like I said, I hope at least one person still reads this. Until next time.......
Posted by Kim at 8:39 PM No comments: 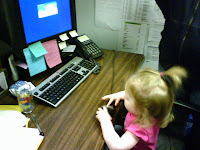 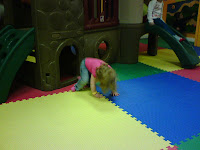 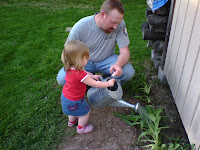 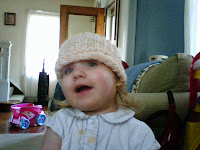 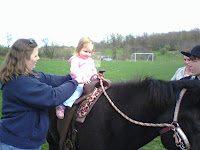 It can be done

This is proof that I might be able to handle 2. Our friends Keith and Sonja were here this weekend with their new baby girl Aida. After sniffin' the baby the whole weekend I got the bug so I wanted to see if I could do it 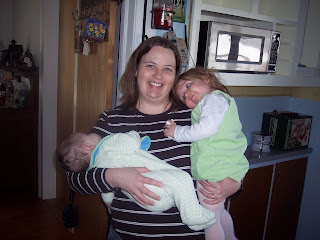